Her Indoors and I have recently returned from a long weekend in Venice, courtesey of ?15 RyanAir flights. The RyanAir website had a revealing article about Venice, a little harsh in my opinion, but hitting home for those spending more than afternoon in the city:

There is a very real danger that Venice may degenerate into a kind of Disney-esque historical theme park, with few genuine Venetian inhabitants outside the tourist industry.

It is in the intense heat of a Mediterranean summer that Venice can get too much and the tourist congregations too large. Many savvy visitors are now choosing to turn up here out of season, in the colder months when swirls of mist and frosty winds descend on the canals. At this time, the beauty of this unique city, despite all of its problems, emerges in quintessential Venetian experiences, such as getting off a vaporetto at a random stop and ambling down a deserted canal, sniffing out an unheralded trattoria.

Well, there was a surreal quality to the city, and there were lots of tourists (not that many), but why not? Venice has thrived on tourists of one sort or another since it first sprang out of the marshes 800 years ago.

As a city, it is so unique with its network of canals, criss-crossed by hundreds of bridges linking together narrow streets and alleys. The architecture is fabulous in its quantity, scale, detail and of course age. It always amazes me that most of these buildings were started in the 13th Century and finished in their current form in the 15th Century, 500 years ago. 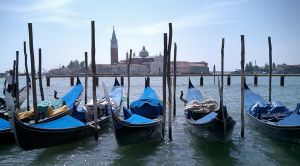 Anyhow the weather was beautiful and it gave me a chance to try out my birthday present, a Casio Exilim S3 digital camera. Size was the prime factor in this choice – the camera is significantly smaller than a pack of cigarettes. At the risk of looking like a tosser, I can wear it on my belt, and hopefully decrease my chances of losing it (something I’m rather good at).

I was really pleased with the photo quality. The camera runs to 3.2 mega pixels with a crisp fixed focus lense (I compromised auto focus for size). I’ve posted my Venice photos on this site, so judge for yourself.

Incidentally, I found XnView to be a great piece of freeware for browsing photos. Basically it’s like the PaintShop Pro of old with a few really handy bits chucked in: